So, where do I start?

My name is Jason Lineham and for my birthday last year in May 2015 my wife, Samantha Webster, presented me with a large cardboard box. On opening this box I encountered a head. Here’s a photo, as taken on the day:

Samantha is wont to buying me the strangest of presents but she really outdid herself with an antique lifesize ventriloquist dummy head of Ally Sloper.

It seemed a shame to leave this head without a body so the next day we began a project to make this poor old fellow complete again by creating him a body and togging him out as would befit him and, after several months, he seems to be quite happy with our work.

Who is Ally Sloper, you say? You may well ask. Ally Sloper was a Victorian comic book character; the very first recurring comic book character, in fact. A Whitechapel born cockney schemer. Created by Charles H. Ross, he first appeared in a publication called “Judy: or The London Serio-Comic Journal” in 1867. The strips were first drawn by Ross and later by his wife Marie Duval.

Such was Sloper’s popularity with the general public that in 1884 he was given his very own publication, “Ally Sloper’s Half Holiday” which ran until 1916. You can’t really exaggerate just how popular Sloper was at that time; he was, as we would term it today, a superstar. As well as the weekly magazine, his phizog appeared on all manner of merchandise, from pipes to pocket watches, and sauce bottles to door stops. Sloper was everywhere, he even starred in a few moving pictures. Strange then that, despite a few attempts in the 20th century to revive him, his fame has waned and few today have heard his name.

So, back to the real Ally Sloper. The one Samantha and I brought back to life with our own hands. The one we now have to put up with because he won’t leave. The one we now have as an unpaying lodger who sits in the corner of the living room making comments about every single thing we choose to do. Well, it seems he wants to let the world know he’s back. I’ve told him about these computers we have now (or, the Vulcanite Typewriter, as he terms it) and, although I don’t think he quite fully grasps the concept (a bit like telegraphy?) I’ve told him that he can put his thoughts out there to the world.

So, that’s me done. The rest of the blog is Sloper’s. He’s out in the world again.

God help us all. 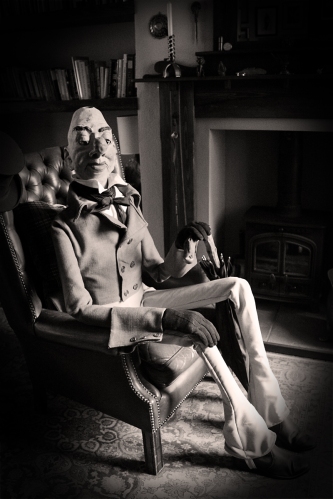